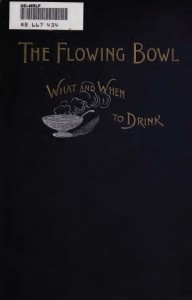 New York bartender William Schmidt, nicknamed “The Only William”, commented in his 1892 book The Flowing Bowl that:

“Mixed drinks might be compared to music: an orchestra will produce good music, provided all players are artists; but have only one or two inferior musicians in your band and you may be convinced they will spoil the entire harmony.”

The Only William receives much less attention from historians today than Jerry Thomas and Harry Johnson, yet it could be argued that he was far more famous in his lifetime than either of them.

Born in Hamburg, Germany, William gained fame there as a bartender, and would later state that it was not entirely true that the best bartenders are Americans, or that the best fancy drinks are of American origin. He was quick to point out that he mastered his craft in Hamburg. He also noted that “The finest mixed drinks and their ingredients are of foreign origin. Are not all of the superior cordials of foreign make?”

William, with his small face and giant moustache, arrived, in 1869, in Chicago. By 1873, he took charge of opening the Tivoli Garden with 16 bartenders under him. He was renowned for his acrobatic bartending feats: throwing flaming and non-flaming drinks in graceful arcs. He was even better known for his ability to create drinks that would even convert people who swore they liked nothing stronger than lemonade.

He moved to New York in 1884, where he tended bar at the Bridge Saloon. This may have been its name or simply a geographic monicker, as it was at the Manhattan end of the Brooklyn Bridge and was pulled down a few years later to make way for bridge approaches.

After 20 years behind bars in the US, Schmidt took his first holiday and returned to Hamburg, in 1889, to visit his elderly parents (who were aged 90 and 92 at the time; they passed away the following year). Upon his return to New York, he took on a business partner and opened a place on Broadway near Park Row. When his partner died shortly after, the bar was sold. He stayed on as bartender, through several years and different owners. Eventually the bar was moved to 58 Dey Street, one door west of Greenwich Street, a site that is precisely at the heart of Ground Zero today, as the buildings on that part of Dey Street were torn down to make way for the World Trade Centre.

William was renowned for creating new drinks. And at one point he was estimated to have invented a new one daily. He even created a “$5 cocktail” at a time when drink prices hovered around 15 cents. Sadly, that recipe is lost. He was credited with an encyclopedic knowledge of the classics, but he preferred talking with his customers, then inventing new drinks on the spot to suit their tastes and moods.

He authored two books: Fancy Drinks and Popular Beverages published by Dick & Fitzgerald (who also published Jerry Thomas’ book), in 1891, and a much larger volume, The Flowing Bowl, published by Charles L Webster & Company the following year. Two books from different publishers in such a short time? Not exactly. Fancy Drinks and Popular Beverages simply contains the mixed drink chapters from The Flowing Bowl, which is a much larger book, containing Schmidt’s version of the history of various beverages, descriptions of historic Greco-Roman banquets, samples menus with beverage pairings, plus a lively selection of poetry readings whose focus is on drink.

Despite packing hundreds and hundreds of recipes into his book(s), many of his drinks never made it in. These were often created when a journalist writing about drinks asked him for a classic and, without telling the writer, he created them on the spot. Drinks like the Svengali Cocktail and The Angelus made only into newsprint.—excerpted from Spirituous Journey: A History of Drink, Book Two by Jared Brown & Anistatia Miller (2010)