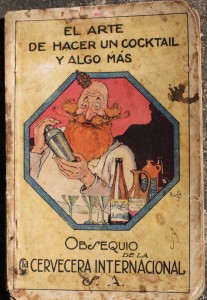 The American invasion of Havana during the 1920s was not limited to thirsty citizens quenching their desire for cocktails on this Caribbean island. Breweries such as Cervecera International were established by partnerships formed with former American beer companies.

Published by this large brewing house in 1927, El Arte de Haver un Cocktail y Algo Mas displays what sort of mixed drinks both Cuban and transplanted American bartenders were offering customers in bars across Cuba. It is also the first book to publish a recipe for a Mojito Criollo!—Anistatia Miller