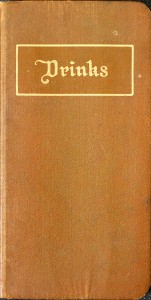 First published in 1914 and again after Straub’s death in 1920, the slender Drinks by Jacques Straub contains over 700 recipes, including a surprising number of drinks that were thought to have been invented later.

Straub had worked at the Pendennis Club in Louisville, Kentucky, prior to moving to Chicago where he became wine steward for the famous Blackstone Restaurant. Jacques Straub gathered these recipes from both his work and his travels, showing a remarkable palate for the current and future classics of his time.—Anistatia Miller