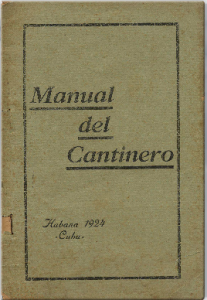 On 9 May 1924, Cuban bartenders met in the billiard room at Hotel Ambos Mundo to draft a series of regulations written by Manuel Blanco Cuétara and drafted by attorney Manuel Zavala. After a couple of interim meetings, the final draft of the organisation’s charter was approved by the government on 27 June 1924, registering El Club de Cantineros de la Republica de Cuba in the Special Register of Associations with  Ambos Mundo’s José Cuervo Fernandez as president and  Cristóbal Blanco Alvarez as secretary-general. Within its first six months, the Club sported 121 members.

Nine years before the United Kingdom Bartenders Guild—frequently cited as the world’s first bartender’s association—was established by a group of London bartenders, the Club set about to train a new generation of Cuban-born professions to live up to journalist Hector Zumbado’s eloquent description:

“They have the elegance of a symphony conductor, the precision and calm of a surgeon ready to operate. They are the chemists of today, the botanists of the  eighteenth century, the alchemists of the Middle Ages, capable of willing the creation of cool, shining gold. They are experts in the topics of sport and international politics, but they never give in to passionate discourse. …They need the memory of elephants for they must remember how to make, without looking them up, between 100 and 200 cocktails.”

Bartender-teachers Don Jose Maria Vazquez Prieto, Manuel Taboada and auxiliary Fabio Delgado were not the only instructors who drilled new students on the proper making of cocktails. Humberto Martin, Artemio Prieto , José Perales and the co-author of this official Manual del Cantinero León Pujol also contributed their knowledge and expertise.

Subsequent cantinero manuals grew in size and depth of knowledge, published in the 1930 Club de Cantinero de la Republica de Cuba: Manual Oficial and 1948 El Arte del Cantinero. The recipes in this first manual—Manual del Cantinero—are simple and to the point, making them easy to memorise, which each certified cantinero did.