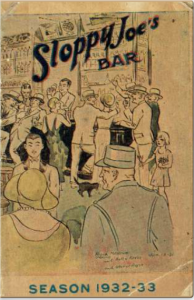 No less than 37 stools and all are taken! Such was the impressive spectacle that lay before Sloppy Joe’s two master cantineros. This perennially crowded bar on Animas Street between Prado and Zulueta Streets was a requisite destination from the 1930s to the 1960s for any visitor to Havana.

José Abeal y Otero arrived in Havana from Spain in 1904 and took a bartending job at the corner of Galiano and Zanja Streets. After three years, he packed his bags and set sail for New Orleans where he honed his skills behind the bar. Then he stopped in Miami where he continued to practice his craft.

As the legend was told in the 1936 Sloppy Joe’s Cocktail Manual:

” In the year 1918, he returned to Havana and got a job as a bartender at a café named ‘Greasy Spoon’ and six months after, he decided to go into business for himself and bought what was then an insignificant bodega [grocery store] at the same corner now occupied by Sloppy Joe’s.

“While operating this small grocery store, he was visited by several of his old friends from the States. It so happened that while some of them were visiting him and seeing the poor appearance and filthy looking condition of the place one of them said: “Why Joe, this place is certainly sloppy. Look at the filthy water running from under the counter.”

Nestled between the fashionable Plaza and Sevilla hotels, José and his partner Valentin Garcia initially sold liquor and sundry groceries. Business developed rapidly and in a very short time, they opened the elongated bar. Sloppy Joe’s had a reputation. One day, an American journalist who lost a wad of money during one drinking session was quite moved and grateful to find his wallet and its entire contents at the bar the next day.

Thanks to this news item, American servicemen based in San Antonio de los Banos made Sloppy Joe’s one of their regular hangouts. As soon as they arrived in the trusted establishment, the GIs put their money on the bar and start drinking. As drinks were served, the cantineros drew payment from the stack until the funds ran out or the drinkers staggered out.

There are some interesting surprises to be found in these small souvenir booklets. Recipes for both a Daiquiri and a Santiago (it’s close cousin) can be found back to back. Two Presidente variations, both gin and rum versions of a Mojito, and 14 “Special Cocktails” including the signature Sloppy Joe’s Cocktail are worth a perusal.—Anistatia Miller

[…] a drinker with a writing problem, began to frequent a divey bodega-turned-bar in Havana that was a favorite of U.S. servicemen stationed nearby. The owner, a Spaniard named José Abeal y Otero, was nicknamed “Joe” by his […]