The Artistry of Mixing Drinks by Frank Meier (1936) 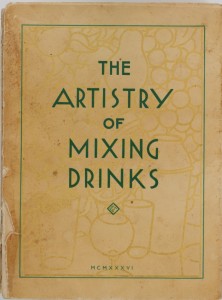 One thousand copies of Frank Meier’s The Artistry of Mixing Drinks were published in 1936. As a bartender in one of the world’s most exclusive venues of the time, the Paris Ritz, where he worked from 1921 to 1947, Meier had amassed an impressive, loyal following of celebrities and other notables as well as the businessmen and boldface names of Parisian society.

The release of his book mirrored the layers of social strata among his customers: 26 copies lettered A to Z were specially printed along with an additional 300 numbered copies on handmade paper. An additional 700 copies were printed on cream vellum paper—still made with care, but not precious enough for the cream of his crop.

Meier’s The Artistry of Mixing Drinks contains nearly 500 drink recipes, including over 40 marked as his own personal creations. He included advice on wine regions and vintages, three-dozen sandwich recipes, bartending tips and tricks.

But Meier had a restless mind. And this was his book. There is a primer on horse racing, antidotes for poisons, a world time zones chart, nautical mile conversions, the circumference of the earth in feet and miles plus the planet’s surface area, the deepest point in the ocean and the height of Everest.

Need to calculate the carat weight of a diamond or a pearl? Work out the measure of a bolt of silk in yards or nails? Wondering what the lbs per square foot pressure is from a brisk gale? Need to remove stains from an oil painting? Meier even included instructions on how to aid a drowning victim, someone struck by lighting or bitten by a snake.

The Artistry of Mixing Drinks is so much more than a cocktail book, and it is our great honor to bring it back into circulation for the first time since those 1000 copies passed through Meier’s hands and into bartending history.