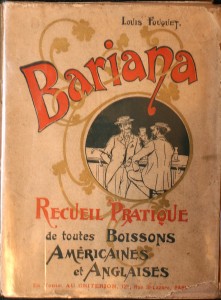 Originally published in 1896, Bariana: Recueil de toutes boissons americains et anglaises, is regarded as one of the earliest-known French cocktail books. It was written by Louis Fouquet, head barman at The Criterion in Paris and later owner of the café that still bears his name. Although the title implies there are many American and British mixed drinks in this volume, there are also creations and variations that are truly unique to France within these pages. The barware that was also illustrated in this volume demonstrates the level of sophistication that Parisien bartenders were able to achieve in the thirty years after mixed drinks made their appearance in French drinking culture around 1862, when the wine industry was stuck a near-fatal blow with the introduction of phylloxera. This French classic was also reprinted in 1902. —Anistatia Miller